The Prune cookbook was a heavily anticipated release, and I was excited when I first received it. I used to live a few blocks away from the acclaimed restaurant, and while I made it there for a brunch a few times (ah…. the days before kids), I’ve never been for dinner. The cookbook is intriguing, and many of the dishes look delicious — but there hasn’t been a ton I’ve actually wanted to make. There is one dish, however, that alone made the $32 well spent: Toasted manti with garlic yogurt. It’s amazing.

Manti is, essentially, a turkish dumping. They are usually boiled, like ravioli, but Hamilton’s version is toasted. The dish looked beautiful in the picture, and the description sounded great. And as a Jewish person with strong Israeli ties, Middle Eastern cuisine has always been one of my favorites. But, while I was really excited to make this dish and planned to follow the recipe to the T, I had two hesitations. 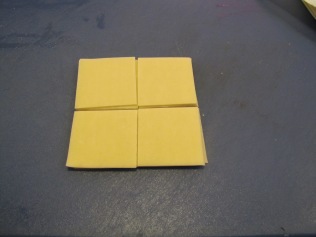 My first hesitation is that rather than use homemade pasta dough, Hamilton calls for wonton wrappers. I like to make everything from scratch whenever possible, especially pasta dough. However, Hamilton insisted on these, so I tracked some down at a local speciality grocer.

Broth out of a can? You must be crazy.

Similarly, my second hesitation pertained to the use of College Inn canned beef broth in the dish. Thou shalt not use store-bought stock is, like, one of my ten commandments. I couldn’t imagine using something out of a can. However, Hamilton had written specifically: “please do not try to ‘improve’ this dish by using homemade stock”. So, as with the wonton wrappers, I heeded her advice.

WIth all of my ingredients in hand, I started by rolling ground lamb into tiny balls and putting them on a plate. Please note: even to make about 40 of these —enough for 4 servings— you will probably only use ¼ pound, or so, of lamb. So, buy a small amount, if you can, or save any leftover meat for another recipe. Lamb burgers with tzatziki, anyone?

The next step is to actually form the manti. Chef Hamilton stresses that this is an arduous process and that one should enlist a helper to speed things along. I wouldn’t say it’s quite that bad. The process is relatively simple: quarter the wonton sheets, place a tiny lamb meatball inside, and then fold the piece in half lengthwise, then widthwise. It’s a little hard to explain, but if you look at the way the dumplings are shaped, it’s not hard to figure out. Just put on some tunes, fix yourself a drink, and get to it.

While the manti froze, I made the yogurt sauce, which is just Greek yogurt, olive oil, salt, and garlic. A lot of garlic. The recipe calls for “one big, stinky garlic clove,” which seems like a lot. And, it is. In fact, the microplaned garlic overwhelms the dish. But, despite this, it actually works. Sometimes more is…more.

After taking a nice break from the kitchen to hang out with my daughters, I took my sheet tray out of the freezer, removed the plastic wrap, and popped the manti in the oven. While they baked, I made the cayenne butter.

Once the manti were browned around the edges and looking all delicious, I removed them by hand and placed them into a simmering pan of College Inn beef broth. This part was tough, as the Manti were super hot, and they kept burning my fingers. But, eventually I got them all in and let them simmer for a few minutes.

Now, according to the book, the idea here is that the broth should pick up some of the starch from the wontons, creating a thicker broth. This is how one usually makes pasta sauce with the starchy pasta water. I gotta say, that doesn’t seem to quite work with wonton wrappers. There was a negligible amount of excess starched released into the broth. 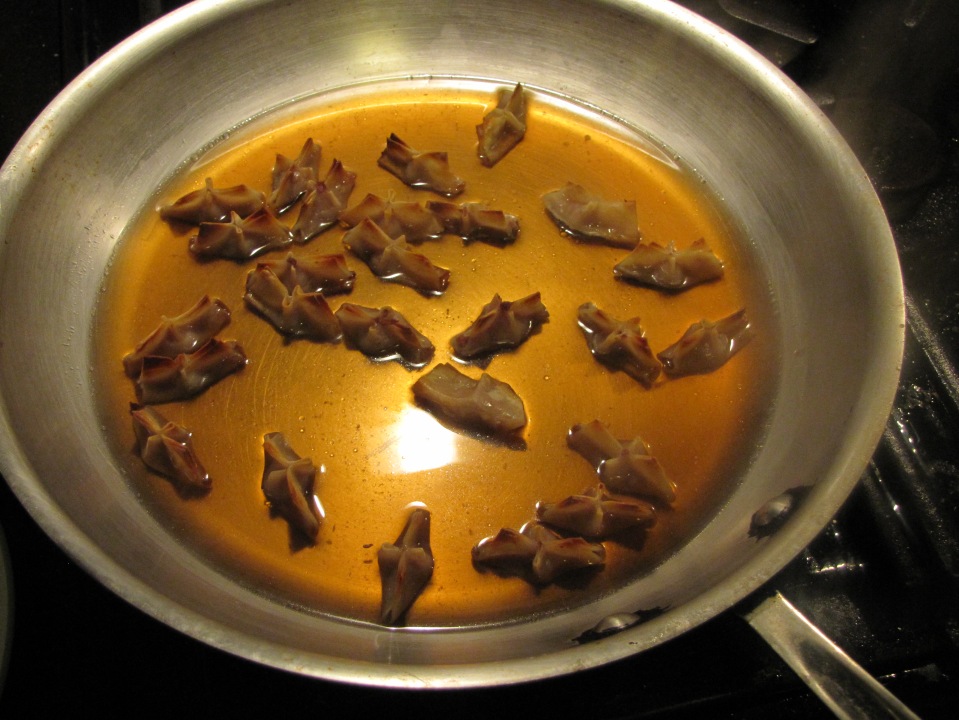 Meanwhile, I formed a nice-looking circle of yogurt on two plates, and tried to guess how round they should be to accomodate about 12 manti per person. I also avoided making the yogurt layer too thin— a thicker layer would help prevent the broth from leaking into the yogurt. As chef says in the book, that mound of yogurt needs to stay pristine.

Probably the most frustrating part of making this dish  is getting all of the manti out of the simmering-hot broth and around the yogurt circles. Not only are they incredibly hot, but you have to move quickly to ensure the manti are still somewhat warm by the time they get to the table. It also takes a bit of finesse to spoon the broth and cayenne butter around the manti without spilling any onto the yogurt. All of this is obviously easier when making for a couple people than it would be for a dinner party with several guests. Nevertheless, I highly recommend making this dish. It’s beautiful, delicious, and really not that difficult to make.