Pasta. Who doesn’t love it? Noodles and red sauce is as much a part of New York history as, say hot dogs and toasted peanuts. While spaghetti with meatballs is, perhaps, the quintessential comfort food, there are so many variations of the Italian-American staple that it’s impossible to pick one as, say, the best in the city.

The octopus and bone marrow fusilli at Marea on Central Park South is often cited as the best pasta dish in the city. It’s the ultimate surf-and-turf concoction that satisfies on multiple levels. So, when I found out the recipe is in Chef Michael White’s cookbook Classico e Moderno, I knew I had to try making it.

It didn’t come out that great.

A couple weeks later while the wife and kids were out of town, I stopped by Marea after work, plunked myself down at the bar, and ordered a bowl of the fusilli to see how the real deal is supposed to taste. It was every bit as good as they say and nothing like what I made at home. My version wasn’t as light, it wasn’t as acidic, and it just wasn’t all that great. When I got home, I was frustrated, perplexed, and maybe a little bit bored, so I did what any reasonable person would do: I emailed the restaurant for help.

I explained, in my somewhat desperate-sounding email, that I wasn’t sure what went wrong, and asked a few specific questions. For example, the recipe says to use tomato puree, but I don’t know what that means. You see, there’s no exact definition of canned tomato puree: some people take it to mean tomato sauce that’s been cooked down to a puree, while for some it means fresh tomatoes that have been blended. I was confused and needed help. I definitely did not expect to receive a response.

You can imagine my surprise when I received an email from the Chef de Cuisine just an hour or two later. He had gone through the trouble — during service none-the-less — to take a look at the published recipe and tell me how I could improve upon it.

Not only did the chef clarify what they mean by tomato puree, he told me the exact brand to use. Not only did he mention that the recipe called for too much vegetables, he explained how to prep them so that they integrate better into the sauce. In short, he went above and beyond.

Armed with this new knowledge, I set out to make the dish a second time. The first challenge was tracking down the exact tomatoes they use at the restaurant. Turns out they use a very specific brand of tomato filets: Stainislaus’ Saporito tomato strips. Unfortunately, this product is not readily available via retail, so I had to trek it down as a restaurant supply store. It was worth the effort, however, as the tomatoes deliver just the right balance of sweetness and acidity. Chef instructed me to lightly blend the tomato filets with a hand blender.

Next up was the octopus. It’s not the easiest thing to track down fresh baby octopus, but Fish Tales in Brooklyn was able to get it for me with a one-day notice. You should have seen the looks on my kids’ faces when I pulled those suckers (pardon the pun) out of the bag and held them high up in the air. Surprisingly, they didn’t cry, but were rather amused. Once they went back to fighting with one another, I turned back to the task at hand: breaking down the octopus in preparation for the sauce.

As I mentioned, the chef gave me specific instructions for the mirapoix that are not found in the book: grate the veggies instead of mincing them. Once the onions, carrots, and celery were prepped, it was time to turn to the seasoned breadcrumbs. The instructions for this were straightforward easy to execute.

But, first I had to fix myself a Negroni.

With all the mise prepped and myself slightly lubricated, it was time to start putting everything together. Wait, you may be asking: what about the actual fusilli? Didn’t I make it from scratch? How could I not make it from scratch. I’m going to level with you. While I’m all for homemade pasta, and make my own noodles whenever possible, Fusilli, is the one shape I just don’t want to take on. I can stand there and stuff and shape 100 tortellini, but there’s something about fusilli that just makes me nervous. So, I simply stopped by Eataly one afternoon during my lunch break and picked up the highest quality they had. 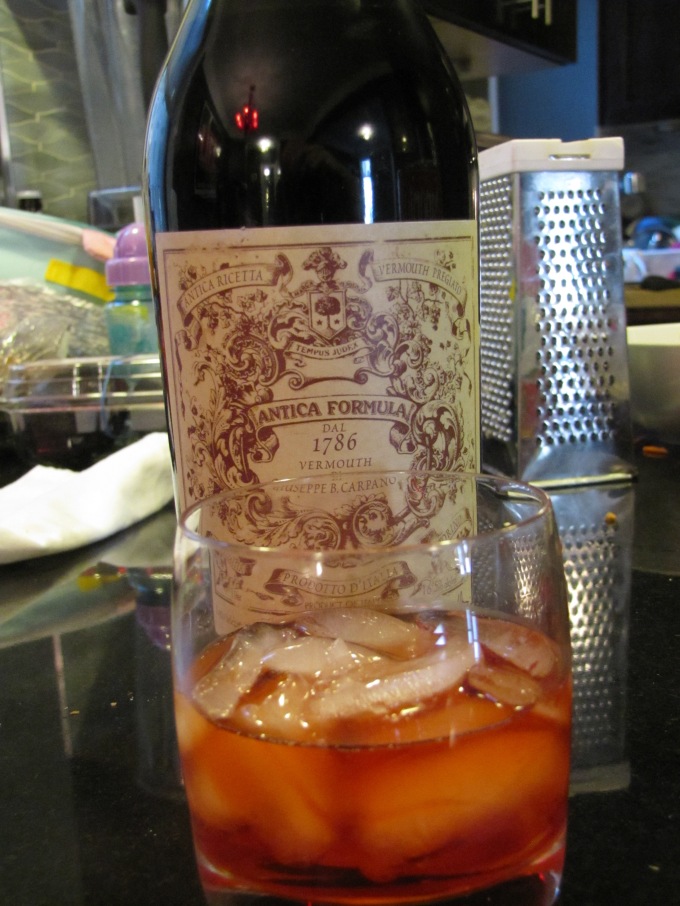 My Negroni with Antico Vermouth

Back to the braise: the recipe says to sauté the octopus for five minutes until it’s opaque and begins to release its water. I felt that was far too long and risked the octopus becoming gummy. So, after about 2 minutes, I dumped the wine and tomato sauce in and let it GENTLY simmer. The book goes out of its way to describe just how lightly you should let the sauce simmer, so that only an occasional bubble surfaces. I found this technique to be somewhat revelatory and applicable to braising in general. I conceded that, perhaps. I’ve been letting all my sauces and reductions simmer far too harshly all these years.. 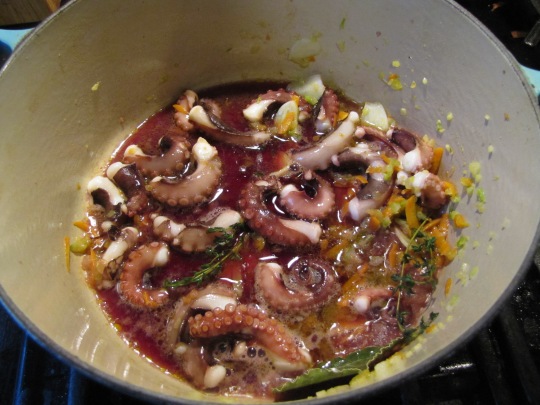 After an hour or so, I prodded the octopus with a fork to test for doneness. It was tender and not at all gummy, so I took it off the heat and started to sauté the bone marrow. I simply seared the cubed pieces for a minute or two and transferred them (along with the rendered fat) to the braise. After that, the dish was ready to be plated and topped with a sprinkle of the seasoned bread crumbs.

The dish looked and tasted about as good as the restaurant, with the exception of the actual pasta. I don’t think anything can match the freshly made versions that come out of Marea’s two Michelin-starred kitchen. Nevertheless, this was a delicious and impressive dish I will no doubt be making again soon.

As a side note, Eater voted this one of NYC’s most iconic dishes just as I was writing this post. Take a look: https://ny.eater.com/maps/new-york-iconic-dishes.