I love asparagus. It’s not necessarily the flavor, texture, or color that gets me excited, but, rather, what the vegetable itself represents. Asparagus is one the very first items of spring produce to appear in the NYC area, shortly following everyone’s favorite bellwether — ramps. And after the brutally long winter we just endured, this year’s first asparagus was surely a sight for sore eyes.

In my humble opinion, the most flavorful preparation of asparagus includes the classic accompaniments of parmesan cheese and runny egg. Otherwise known as Asparagus Milanese, this dish and its variations can be seen in Italy, France, and other European cities. As a big fan of the dish, you can imagine my excitement when I saw a take on it in the NoMad cookbook. A fancy take on this classic combo from Daniel Humm, one of the most highly regarded contemporary chefs? Uh, hells yeah.

Like most dishes from chef Humm, there are a lot of steps involved in this recipe, Could spending the better part of a day on this dish produce something tastier than simply roasting some asparagus and putting a fried egg on top? Only one way to find out.

I got started with the quinoa, since that would take the most time. In addition to boiling it for 20 minutes, I then had to dehydrate it for a couple hours before deep frying. Everything was simple enough, although the frying was a little tricky because the grains are so tiny. I ended up using a small colander to dip the grains in, and then quickly lift them out after about 10 seconds, or so, in 400+ degree canola oil.

Once the quinoa was out of the way, I moved on to the parmesan foam. I knew this was going to be delicious because the recipe was very similar to the base for a parmesan soup I’ve made from famed Parisian bistro chef Stephane Jego. For this special component of the dish, I used Valserena Parmesan, which is a specific brand of parmesan made from brown cows (Sola Bruna) from Parma’s oldest dairy farm. I first heard about this cheese when chef Barbara Lynch posted about it on Instagram. As a Parm fanatic, I knew I had to try it. While a Google search turned up zero results, I was able to track down the importer, who informed me that the specialty food retailer Zingerman’s would soon start carrying it. I ordered a pound and was not disappointed. The parm, which is particularly delicious, made for an incredible “foam.” I use quotations because it was more of a sauce than a foam. I couldn’t really get the liquid to froth up, even with the use of one of my secret culinary weapons: the milk frother.

After blanching the asparagus, which was quick and painless, I moved on to the brown butter sabayon. Now, brown butter is one of my all time favorite ingredients, and I love making it because it’s all about the timing. Getting the butter to take on those warm, nutty flavors without advancing to the burnt and bitter stage awards patience and concentration.

After mixing my perfectly browned butter with eggs and a few other ingredients, I put the mixture into a siphon — you know, one of those devices used to make fresh whipped cream, or (as I’m told) to get high. I was actually out of the chargers, without enough time to order more from Amazon, so I headed to my local headshop. It’s actually quite funny because over the years I’ve stopped in here a few times to buy something— but it’s always for legit culinary purposes. Besides whipped cream chargers, I have bought a digital scale (for recipes in weight rather than volume), pipe screens (for my portable smoking gun), and more.

After using my immersion circulator to cook the eggs for exactly 27 minutes, I began to plate. It was a pretty straightforward dish in terms of presentation, so even someone as artistically challenged as myself could make it look pretty. And, it tasted even better. This is really an outstanding dish, perfect for a springtime dinner party, and sure to impress your guests. 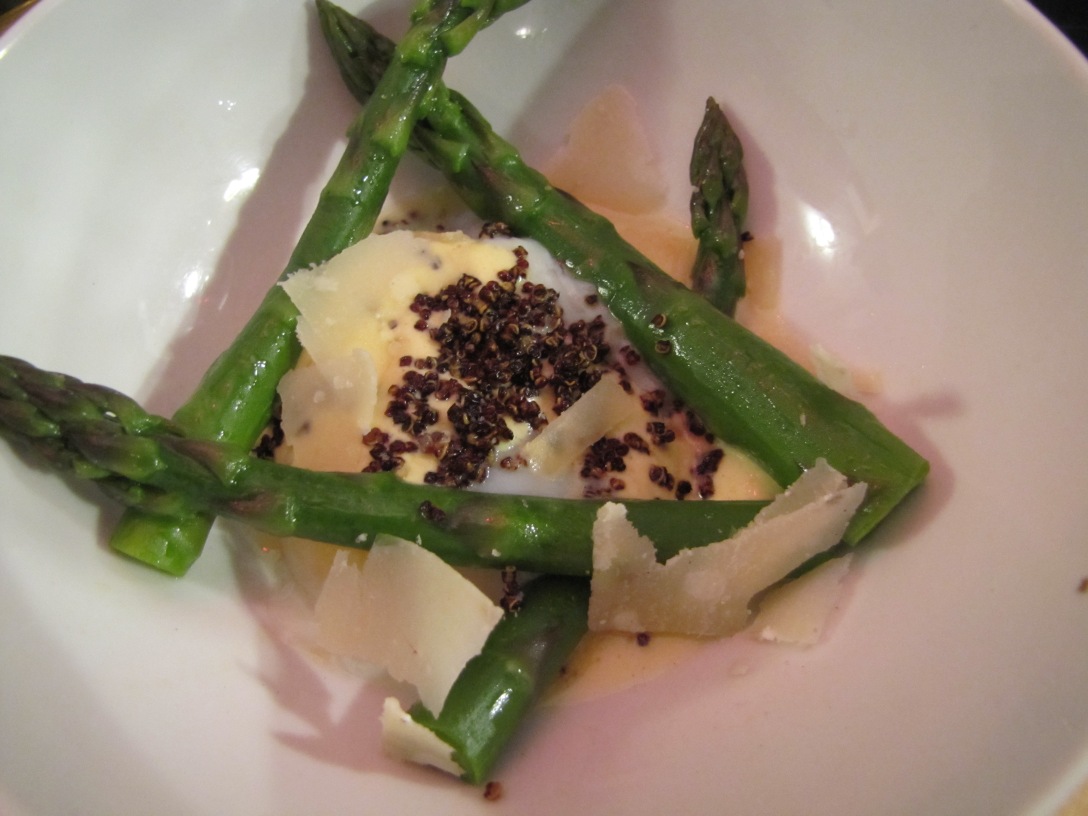