The discovery of a new favorite wine, grape, or region can happen at any time or place, and it often occurs when you least expect it. For some, it happens at a fancy restaurant. For others, in a beautiful vineyard. With me, it all started in a sewer.

Let me back up.

In 2004, I spent a couple weeks in Sydney, Australia for work. The city has a vibrant pub culture, and I was going out every night to take advantage. But, after 6 straight evenings of whisky and brew, I needed something more mellow. I wasn’t sure what exactly, but I knew I wasn’t going to be drinking beer in a pub. I had read that Sydney has a fabulous astronomical observatory, and, well, that sounded like a nice change of pace. After work, I hopped in a cab and asked to be taken to “the observatory.” The driver said he knew exactly where that was.

10 minutes later, we arrived at a pub called The Observatory.

A block away from my apartment, I asked to be let out so that I could walk a bit. After paying my fare, I opened the door and stepped out of the cab.

My feet never hit the ground.

Before I could understand what was happening, the world sort of went black and I could faintly make out the sounds of a woman screaming. On sheer instinct, I lifted myself up back to street level before realizing what happened: I had fallen into a manhole.

After ensuring a few bystanders that I was ok, I headed back to my hotel. But, when I noticed that people were staring at me, I looked down to find that my jeans were soaked in blood. I immediately hailed another cab and hopped in.

“Take me to the hospital,” I said to the driver, urgently.

“It’s not a pub called the hospital, it’s a hospital called the hospital,” I shouted. “Not everything is a pub!” Upon seeing my leg, he stepped on the gas, and before I knew it we were there. After the triage nurses bandaged the wound, they told me I would have to wait a couple hours to get a tetanus shot and stitches. “Great,” I thought to myself. “What am I supposed to do until then?” After a moment, I stepped outside for some fresh air and quickly realized my fate. There, across the street, was precisely where it had been preordained I end up:

Defeated, I hobbled across the street and entered the bar. But I had one last act of defiance left in me. Instead of ordering a Victoria Bitter or Jack and Coke, I asked for a glass of local red wine. It was a McGuigan’s Cabernet-Shiraz blend from Coonawarra; I liked it so much that over the weekend I went to visit some wineries in the nearby Hunter Valley.

It’s no secret that Australia makes some fantastic wines, especially those based on the Syrah -– Shiraz in Ozzie dialect — grape. What is maybe less known is that these wines are getting even better. In fact, a whole new generation of winemakers are turning away from the international style popularized in the 80’s and 90’s to create bottles that more elegantly express their terroir. I hadn’t yet had the opportunity to try many of these new Australian wines, but I’d definitely been meaning to.

I took this curiosity as an opportunity to have my wife’s cousin Stacy and her husband, Gavin, over for dinner. He grew up in Sydney, while she’s from Long Island. And after meeting by chance in Las Vegas, they began dating long distance before starting a life together in Australia. However, they just couldn’t resist the extreme weather, massive crowds, and general discomfort of New York City, and have since moved back with their two children. I figured if I’d be enjoying Ozzie food and wine, I’d want it to be with them.

But, what exactly is Australian food? Like America, the nation was once part of the British Empire and has a rich history of immigration that has resulted in a diverse cuisine. But, its Asian-Pacific location provides for a wealth of ingredients many of us would consider exotic. Planning the menu for this evening would be a challenging but fun exercise, and for help I looked to Australian cookbooks, restaurant menus, and instinct to guide the way.

While it’s always a special occasion when Stacy and Gavin roll through, it was even more so because it was Valentine’s Day. I decided to surprise my lovely wife, Sandy, by making one of her favorite dishes from our much beloved sushi spot Soto. The west village restaurant actually shuttered a couple years ago when it’s chef moved back to Japan, and we hadn’t had this dish since. Now, I know what you’re thinking: “You guys have been married for 10 years and have kids. Aren’t you a little past celebrating Valentine’s Day?” Well, maybe I’m just a romantic with a soft spot for the holiday, because this cured Tasmanian sea trout with caviar, miso, and watercress was even better than I remembered. She was happy, so I was happy.

Accompanying the Arctic Char was a dry riesling from Alkoomi, a winery in Western Australia whose name means “the place we chose” in Aboriginal dialect. It was an easy-drinking white, light on the palate with flavors of lemon zest and hay. 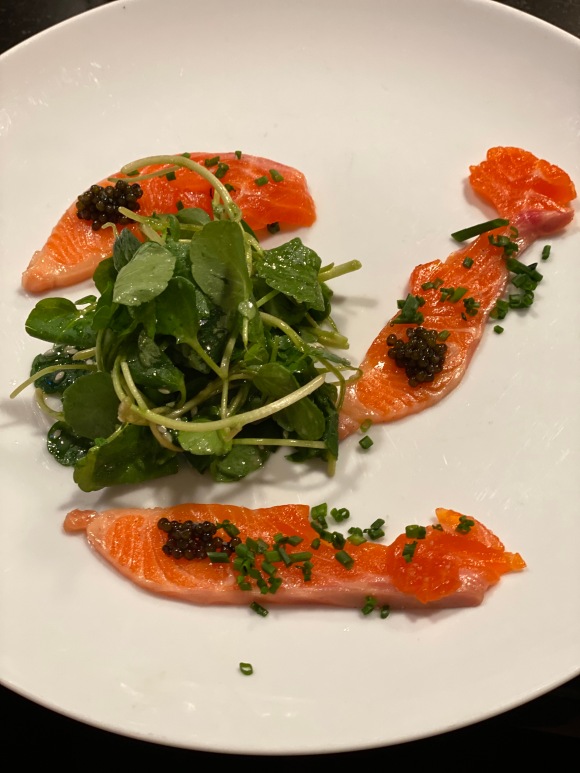 Our second course was a dish created by Greg Marchand, a French chef who trained for many years in London. It featured roasted carrots, one of the most popular vegetables in Australia; along with kumquats, which are native to the pacific; and feta cheese, which was a nod to Australia’s substantial Greek population. 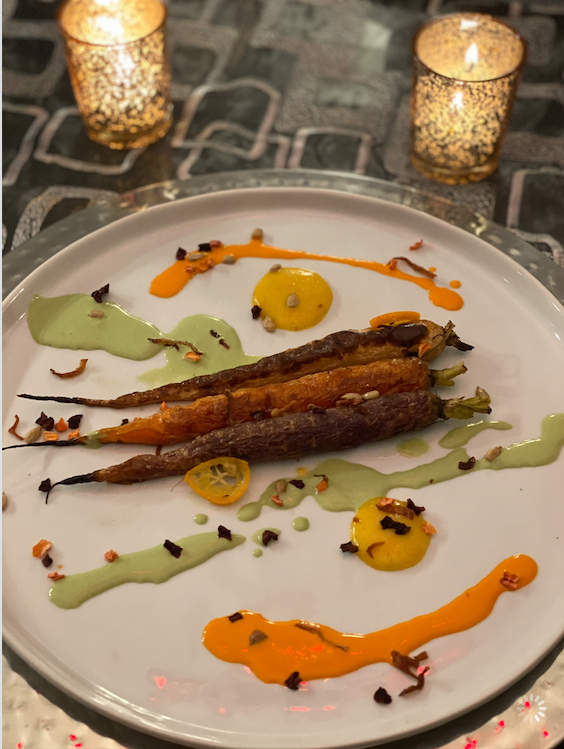 Next up was a venison consomme with rose water, homemade cheese curds, and black truffle. I was particularly excited for this because I don’t think I’d ever seen rose water, a ubiquitous ingredient in the desserts of my wife’s native Iran, used in a savory application. A bottle of 2016 Best’s Great Western Shiraz complimented this with its elegant, medium-bodied structure and already approachable tannins. This wine was from Australia’s oldest and continuously family-owned and operated winery, dating back to 1866.

Our final savory course was lamb with middle eastern influences, utilizing Australia’s best known protein with flavors representing Sydney’s many Lebanese citizens. I also chose this dish because lamb has a certain special significance for me and Sandy. In a traditional Jewish wedding, the bride and groom spend some time alone together in a private room after the ceremony and before the reception. In the old days, this is when the marriage would be consummated, but in more modern times simply gives the couple a few moments to reflect on the path on which they have embarked. However, when Sandy and I entered this room on our special night, we quickly ran to a platter of lamb chop lollipops that had been left for us. Famished, we sat down on a couch, grabbed a few chops with both hands, and devoured them like animals.

Tonight, at least, we had the decency to use utensils. The boneless loin with sunchoke-tahina puree, cucumber yogurt gel, lamb-fat roasted potatoes, and a cumin-spiced ju paired perfectly with the “Plexus” Rhone-inspired blend. This wine was made by John Duval, who was for many years head winemaker for legendary Australian producer Penfold’s.

I don’t often serve cheese courses, but I knew of a dish that would allow me to honor a very cherished component of Australian culture. No, not cheese. Beer. The recipe, from Eleven Madison Park, was a homemade pretzel-style bread with artisanal cheddar cheese, pickled shallots, mustard, and a sauce made from that icon of the Australian good life: Victoria Bitter. 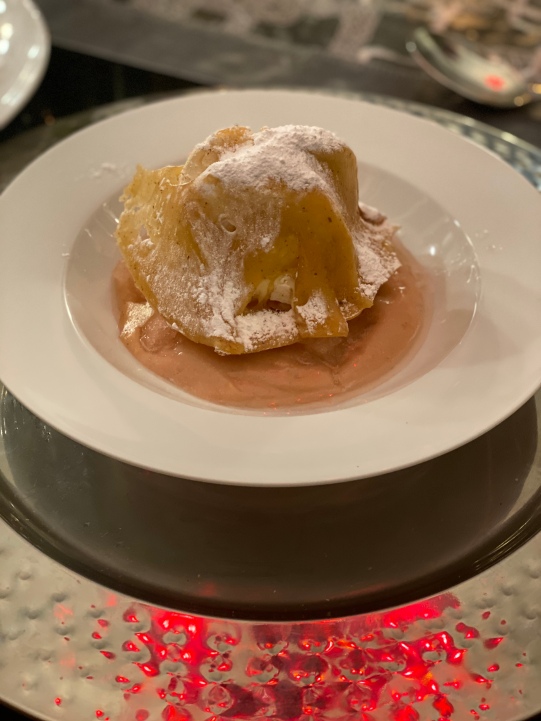 For many years, “Snow Egg” was the signature dish at Quay, one of Sydney’s most highly regarded restaurants. The delicious and visually stunning dessert was officially retired from service in 2018, but not before images of it had been shared on social media a million times over. The dessert incorporates tropical fruit in a variety of textures, along with meringue — a classic sweet that forms the basis of Australia’s most famous treat: pavlova. This particular version, which was made with guava and cherimoya, was delicate, sweet, and, with our Australian dessert wine, a fun way to end the meal — and not just because our kids got a kick out of the a la minute use of a blowtorch.

If there was one takeaway from my trip to Australia, it’s that Ozzies are an amazingly warm and laid back people who are, rightfully so, proud of their unique culture. My brief time there really opened up my mind, as any good journey should, and allowed me to see things from a new perspective. I learned, for example, that when visiting a new country, you should try the local wine. Or, when getting out of a cab, look down first. And, now, 16 years later, I’ve learned this new lesson: if you forget to buy your loved one a Valentine’s Day gift — because I mean, seriously, who cares about Valentine’s Day — find a way to somehow loosely connect your dinner to your relationship, and play it off like you planned it the whole time. It will work wonders, and he or she will never, ever know.